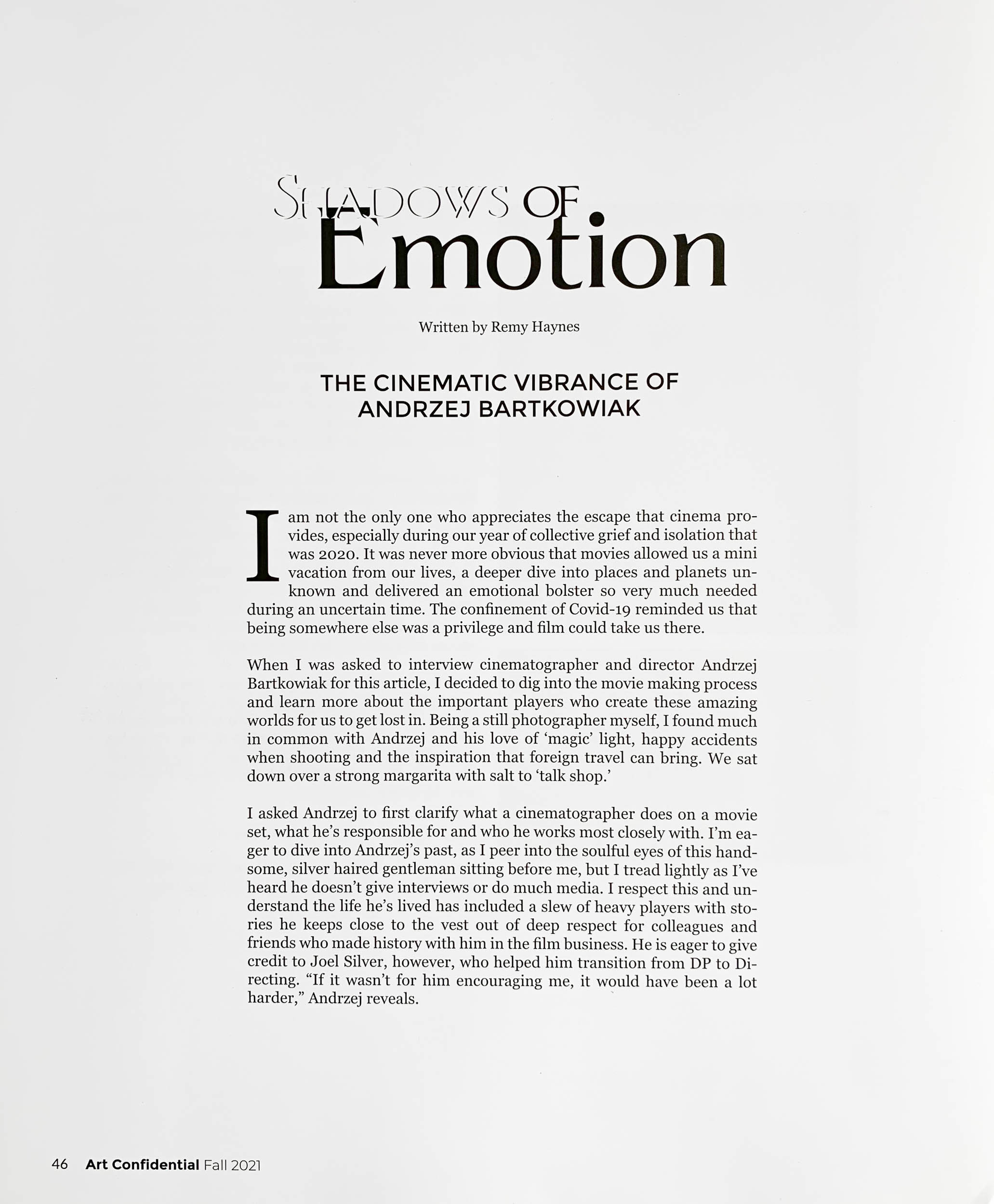 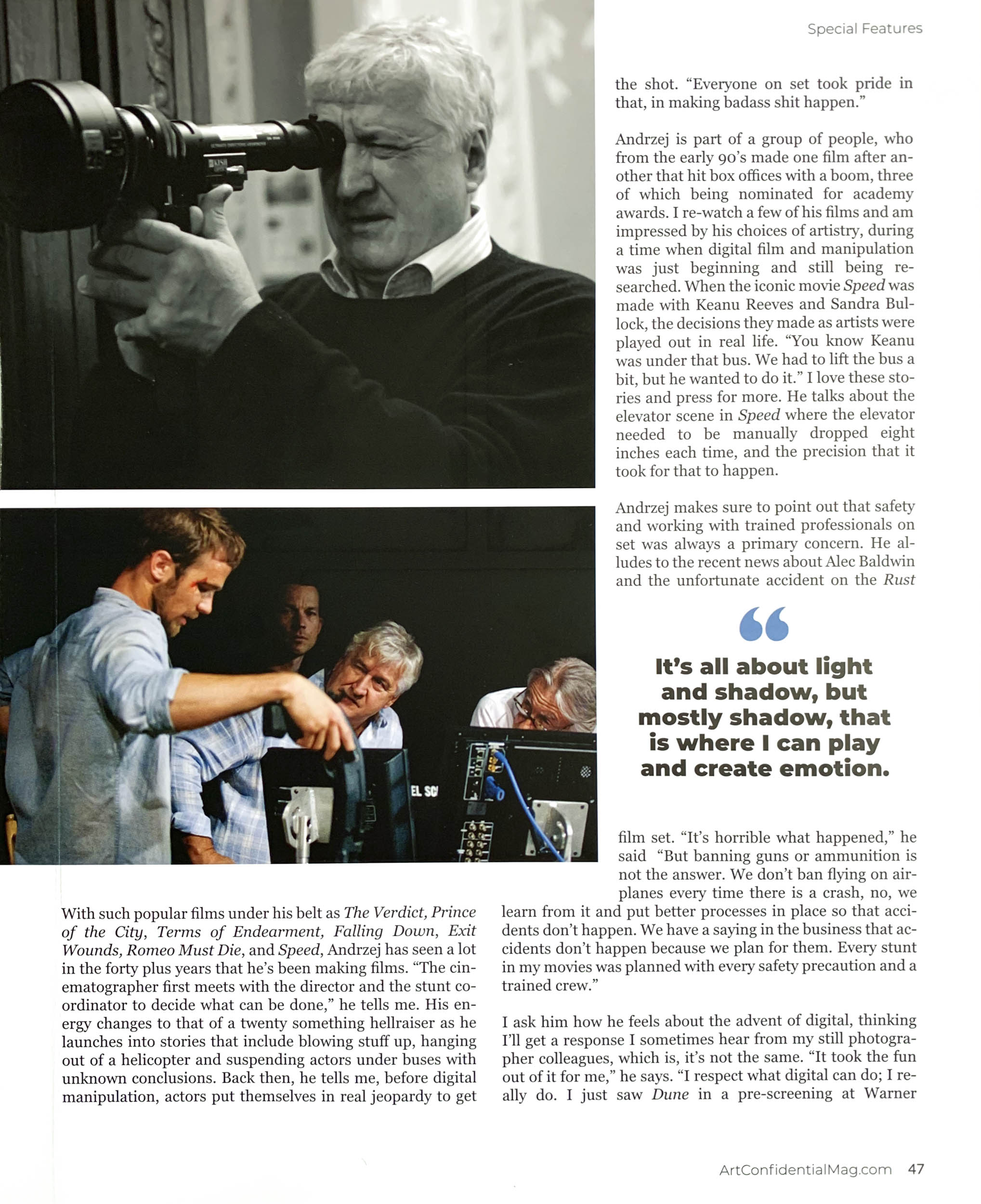 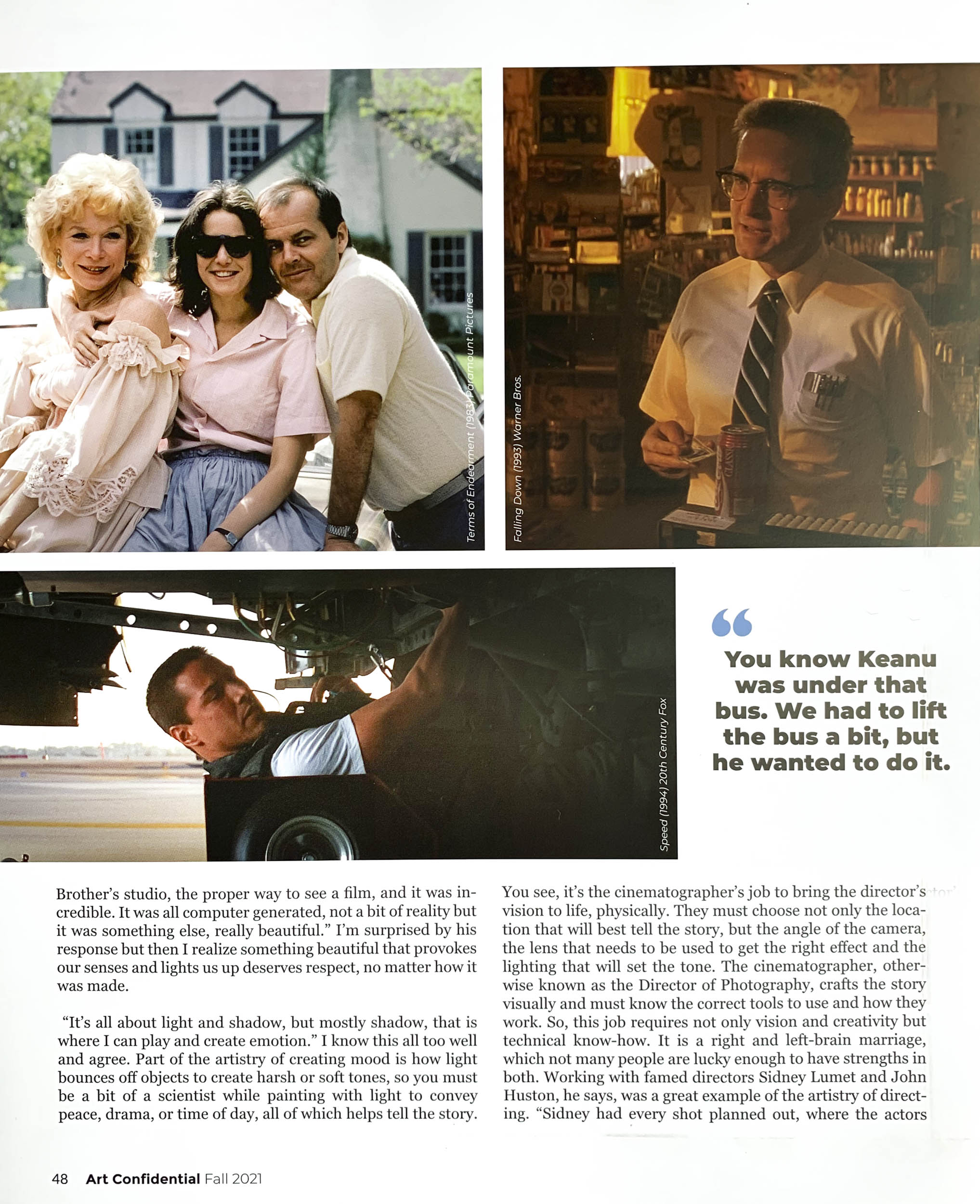 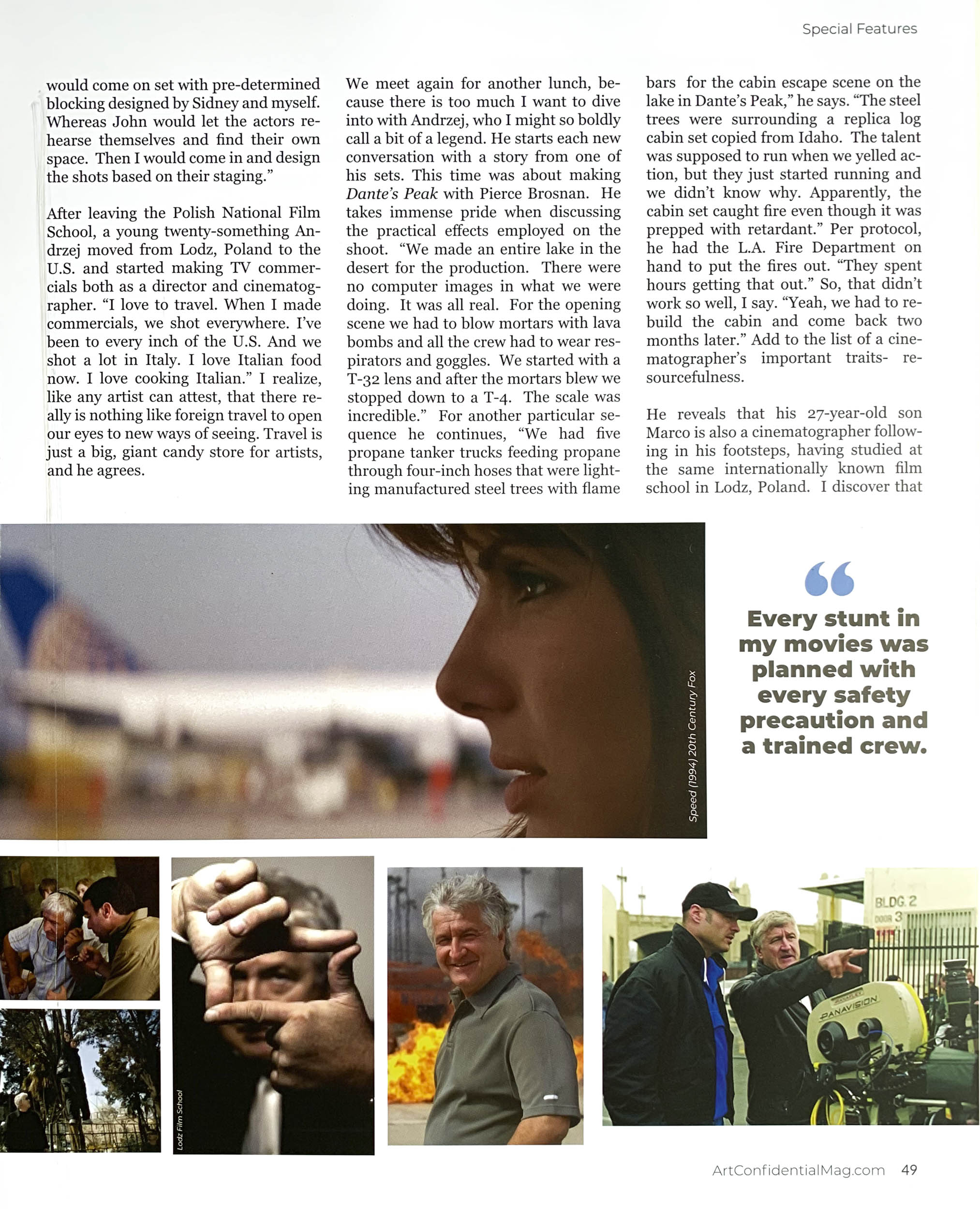 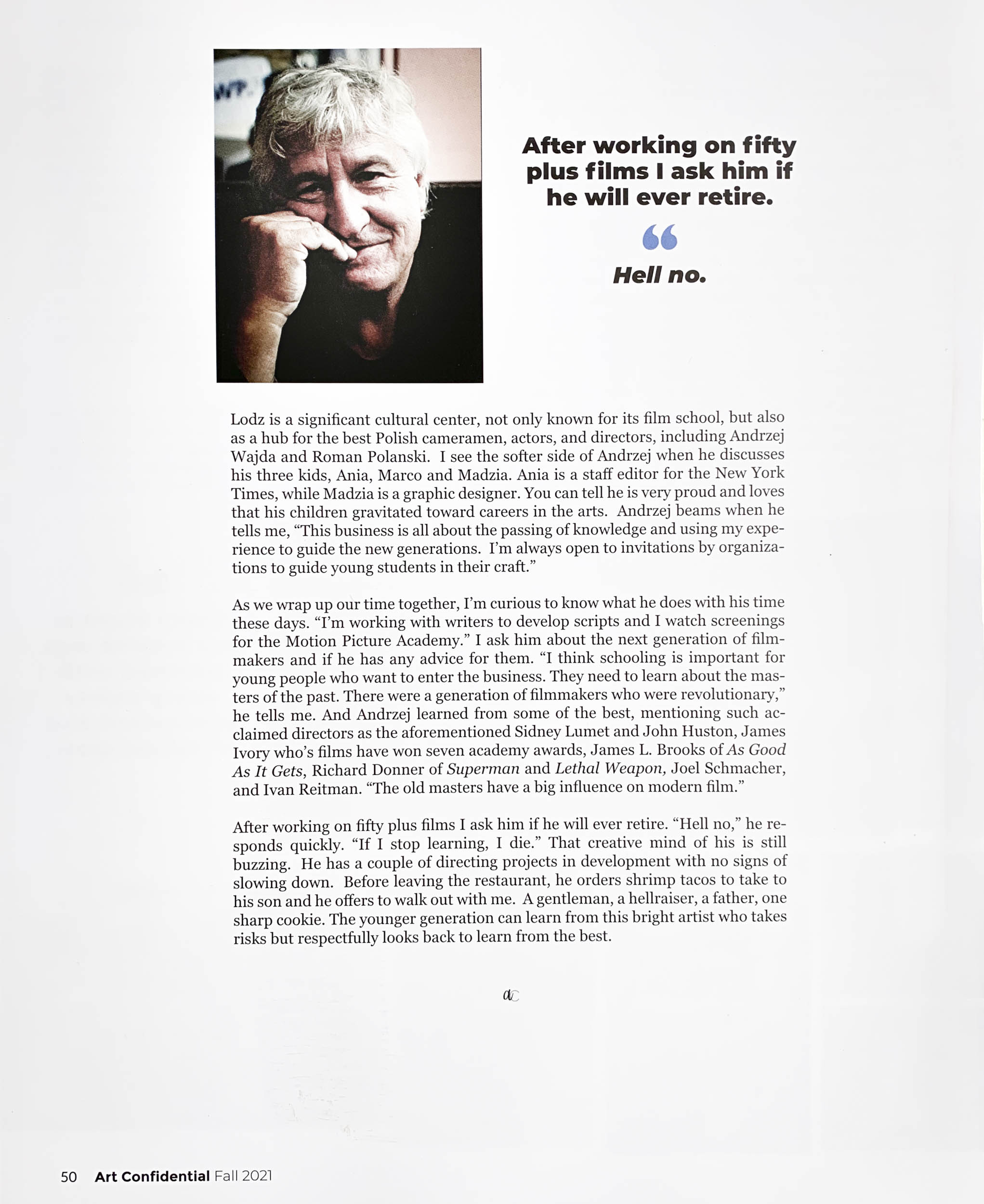 The Cinematic Vibrance of Andrzej Bartkowiak

I am not the only one who appreciates the escape that movies provide, especially during our year of collective grief and isolation that was 2020. It was never more obvious that movies allowed us a mini vacation from our lives, a deeper dive into places and planets unknown and delivered an emotional bolster we all needed so very much during an uncertain time. The confinement of Covid 19 reminded us that being somewhere else was a privilege and movies could take us there.

When I was asked to interview cinematographer and director Andrzej Bartkowiak for this article, I decided to dig into the movie making process and learn more about the important players who create these amazing worlds for us to get lost in. Being a still photographer myself I found much in common with Andrzej and ‘magic’ light, happy accidents when shooting and the inspiration that foreign travel can bring. We sat down over a strong margarita with salt to ‘talk shop.’

I asked Andrzej to first clarify what a cinematographer does on a movie set, what he’s responsible for and who he works most closely with. I’m eager to dive into Andre’s past, as I peer into the soulful eyes of this handsome, silver haired gentleman sitting before me, but I tread lightly as I’ve heard he doesn’t give interviews or do much media at all. I respect this and understand the life he’s lived has included a lot of heavy players with stories he keeps close to the vest out of deep respect for colleagues and friends who made history with him in the movie making business. He is eager to give credit to Joel Silver, however, who helped him transition from DP to Directing. “If it wasn’t for him encouraging me, it would have been a lot harder” Andre reveals.

With such popular films under his belt as, ’Terms of Endearment,’ ‘Romeo Must Die,’ and ‘Speed,’ Andrzej has seen a lot in the forty plus years that he’s been making films. “The cinematographer first meets with the director and the stunt coordinator to decide what can be done” he tells me. His energy changes to that of a twenty something hellraiser as he launches into stories that include blowing stuff up, hanging out of a helicopter and suspending actors under buses with unknown conclusions. Back then, he tells me, before digital manipulation, actors put themselves in real jeopardy to get the shot. “Everyone on set took pride in that, in making badass shit happen.”

Andrzej is part of a group of people, who from early 90’s made one film after another that hit the box offices with a boom, three of which being nominated for academy awards. I do my research and watch a few of his films and I’m impressed by his choices of artistry, during a time when digital film and manipulation was just beginning and was still being researched. When the iconic movie ‘Speed’ was made with Keanu Reeves and Sandra Bullock, the choices they made as artists were played out in real life. “You know Keanu was under that bus. We had to lift the bus a bit, but he wanted to do it.” I love these stories and I press for more. He talks about the elevator scene in Speed that the elevator needed to be manually dropped eight inches each time, and the precision that it took for that to happen.

He makes sure to point out that safety and working with trained professionals on set was always a primary concern. He alludes to the recent news about Alec Baldwin and the unfortunate accident on the ‘Rust’ film set. “It’s horrible what happened’ he said ‘but banning guns or ammunition is not the answer. We don’t ban flying on airplanes every time there is a crash, no we learn from it and put better processes in place so that accidents don’t happen. We have a saying in the business that accidents don’t happen because we plan for them. Every stunt in my movies was planned with every safety precaution and a trained crew.”

I ask him how he feels about the advent of digital, thinking I’ll get a response that I sometimes hear from my still photographer colleagues which is, it’s not the same. “It took the fun out of it for me” he says. “I respect what digital can do; I really do. I just saw Dune in a pre-screening at the Warner Brother’s studio, the proper way to see a film, and it was incredible. It was all computer generated, not a bit of reality but it was something else, really beautiful.” I’m surprised by his response but then I realize something beautiful that provokes our senses and lights us up deserves respect, no matter how it was made.

“It’s all about light and shadow, but mostly shadow, that is where can play and create emotion.” I know this all too well and agree. Part of the artistry of creating mood is how light bounces off objects to create harsh or soft tones so you must be a bit of a scientist while painting with light to convey peace, drama, or time of day, all of which helps tell the story. You see, it’s the cinematographer’s job to bring the director’s vision to life, physically. He must choose not only the location that will best tell the story, but the angle of the camera, the lens that needs to be used to get the right affect and the lighting that will set the tone. The cinematographer or otherwise known as the DP or Director of Photography crafts the story visually and must know the correct tools to use and how they work. So, this job requires not only vision and creativity but technical know-how. It is a right and left-brain marriage, which not many people are lucky enough to have strengths in both. Working with famed directors Sidney Lumet and John Huston, he says, was a great example of the artistry of directing. “Sidney had every shot planned out whereas John would let live action happen every day.”

After leaving the Polish National Film School, a young twenty-something Andrzej moved from Lodz, Poland to the US and started making TV commercials both as a director and cinematographer. “I love to travel. When I made commercials, we shot everywhere. I’ve been to every inch of the US. And we shot a lot in Italy. I love Italian food now. I love cooking Italian.” I realize, like any artist can attest, that there really is nothing like foreign travel to open our eyes to new ways of seeing. I always return from foreign travel inspired by the different quality of light, the foliage, the architecture, the fashion. Travel is just a big, giant candy store for artists, and he agrees. In fact, we go down a rabbit hole talking about his last trip to China where he shows me snapshots from his iPhone 12X that are simply stunning. I vow to him that I will go back to China now that I’ve seen and heard his take on it.

We meet again for another lunch, because there is too much I want to dive into with Andrzej, who I might so boldly call a bit of a legend. He starts each new conversation with a story from one of his sets. This time was about making ‘Dante’s Peak’ with Pierce Bronson. “We had five propane tanker trucks feeding propane through four-inch hoses lighting manufactured steel trees with flame bars on them for the opening scene in Dante’s Peak” he says. “And we had a cabin nearby that the talent was supposed to run from, when we yelled action, but they just started running and we didn’t know why. Apparently, the cabin caught fire even though it was prepped with retardant.” Thanks goodness he had the LA Fire Department on hand to put the fires out. “They spent hours getting that out.” So, that didn’t work so well, I say. “Yeah, we had to try another way.” Add to the list of a cinematographer’s important traits, resourcefulness.

He reveals that his 27-year-old son Marco is now following in his footsteps and making movies, but he discouraged it when he first showed interest. He explained to him that the extensive travel can make for a tough home life, the work coming your way can be fickle and that he would always be compared to him. Undeterred, Marco pressed on and in fact wanted to study at the same internationally known film school as his dad. In my research I also find out that Lodz, Poland is a significant cultural center, known for its film school, and a hub for the best Polish cameramen, actors, and directors, including Andrzej Wajda and Roman Polanski. I see why Marco wants to study there and I see the softer side of Andrzej when he discusses his two kids, Ania and Marco. You can tell he is very proud of them and loves that they both found their way to careers in the arts. Ania is a successful writer for the New York Times and Marco has been making films since he graduated college. “Now I do adult supervision on his projects.” Andrzej beams when he tells me. “This business is all about the passing of knowledge and using my experience to guide the new generations.”

As we wrap up our time together, I’m curious to know what he does with his time these days. “I’m working with writers do develop scripts and I watch screenings for the Motion Picture Academy.” I ask him about the next generation of filmmakers and if he has any advice for them. “I think schooling is important for young people who want to enter the business. They need to learn about the masters of the past. There were a generation of filmmakers who were revolutionary” he tells me. And Andrzej learned from some of the best himself, mentioning such acclaimed directors as James L. Brooks of the Simpsons and Taxi proclaim, Richard Donner of Twilight Zone and The Fugitive TV shows and James Ivory who’s films have won seven academy awards. “The old masters have a big influence on modern film.”

After working on forty plus films I ask him if he’s retiring soon. “Hell no” he responds quickly. “If I stop learning I die.” It seems that creative mind of his is still buzzing. He has a couple of directing projects in development with no signs of slowing down.  Before leaving the restaurant, he orders shrimp tacos to take to his ‘baby’ (son) and he offers to walk out with me. A gentleman, a hell raiser, a father, one sharp cookie. The younger generation can learn from this bright technician who takes risks but respectfully looks back only to learn from the best.