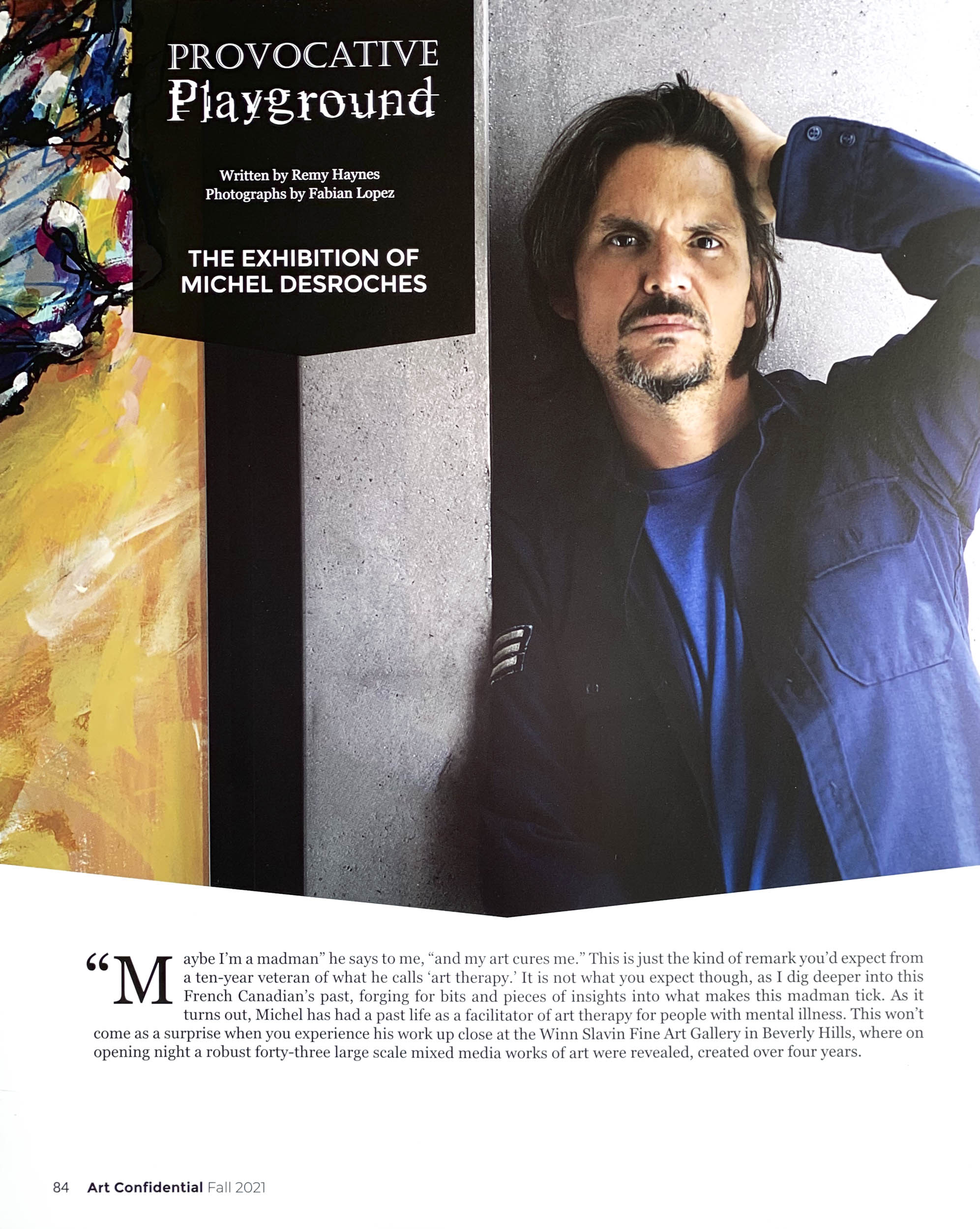 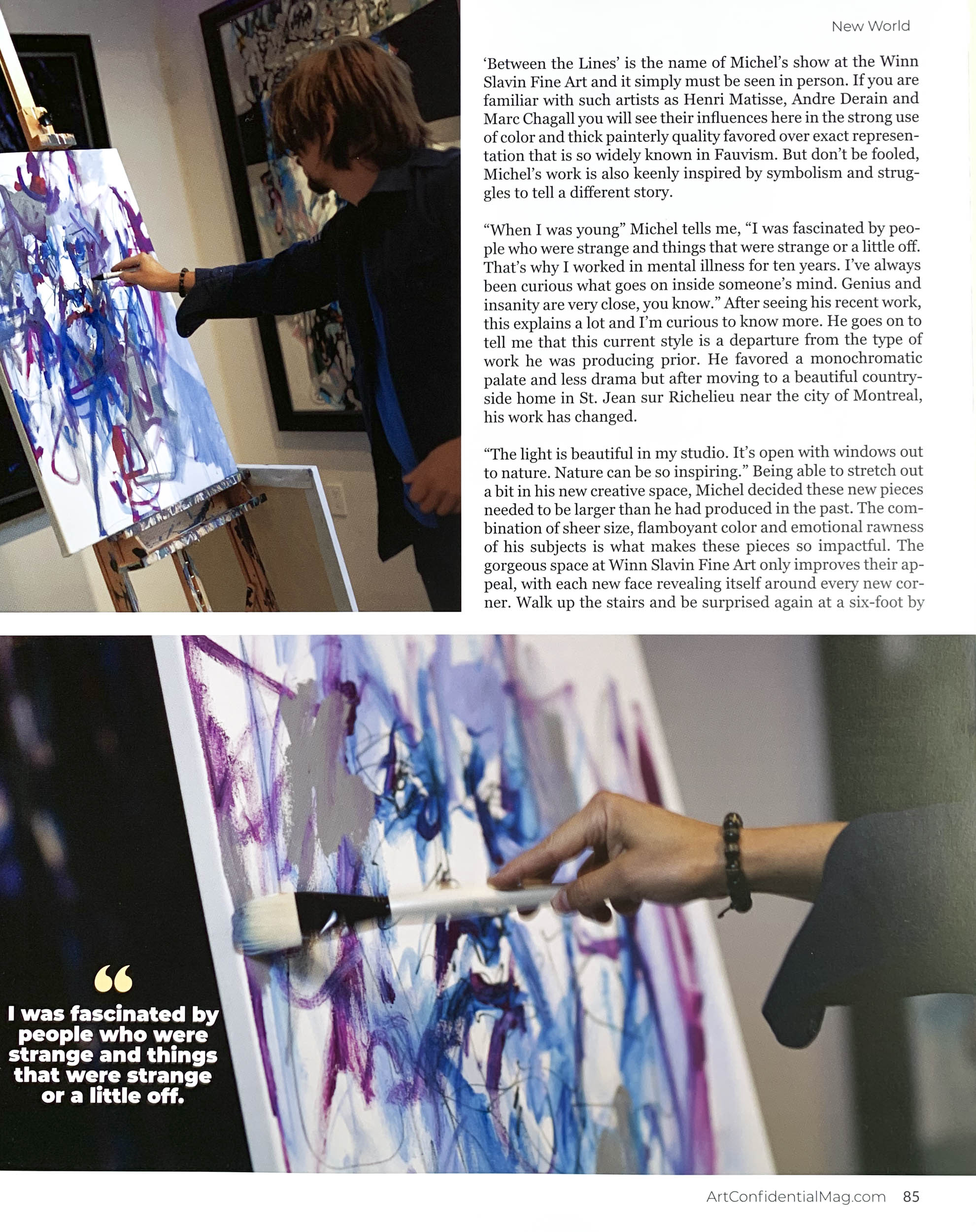 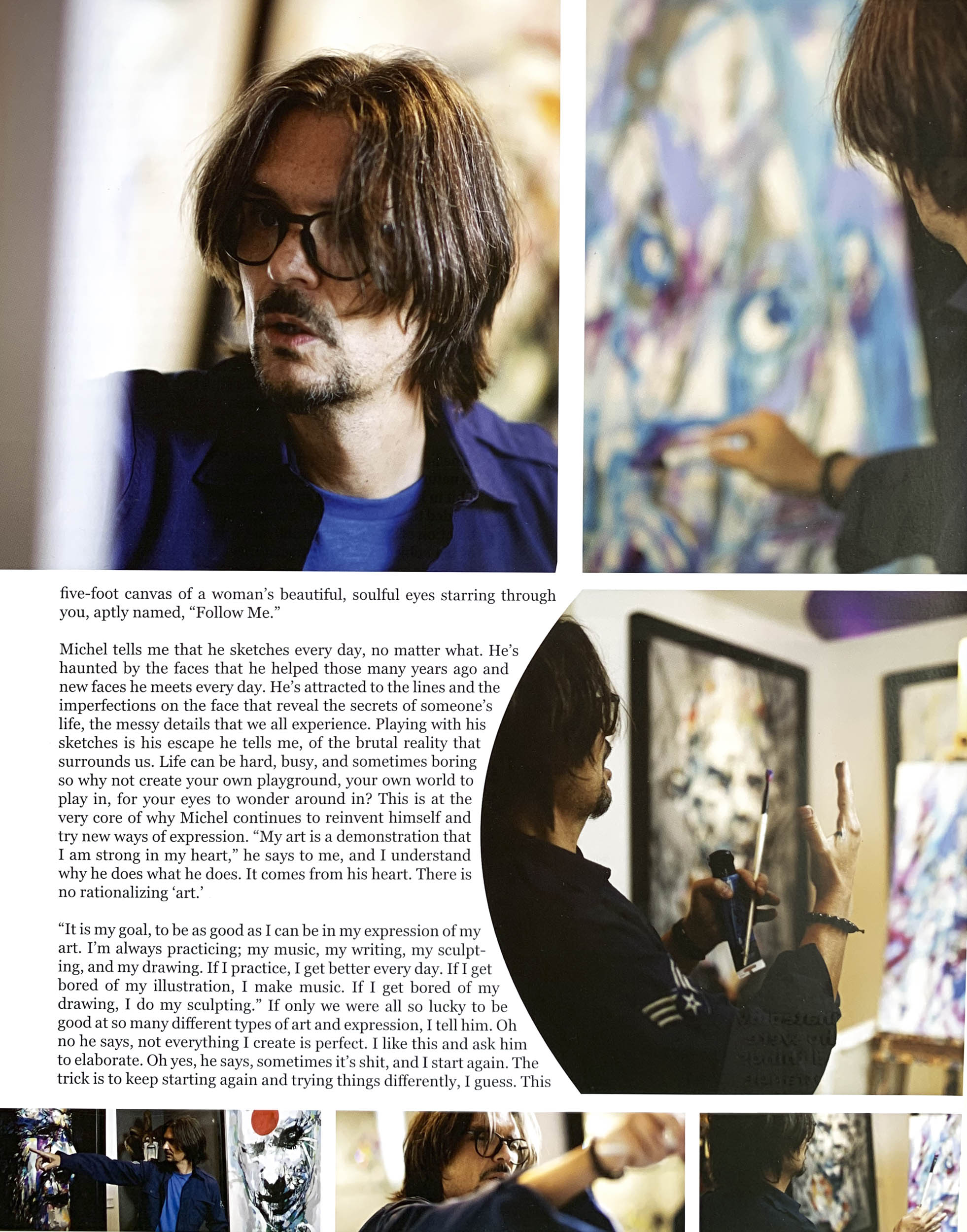 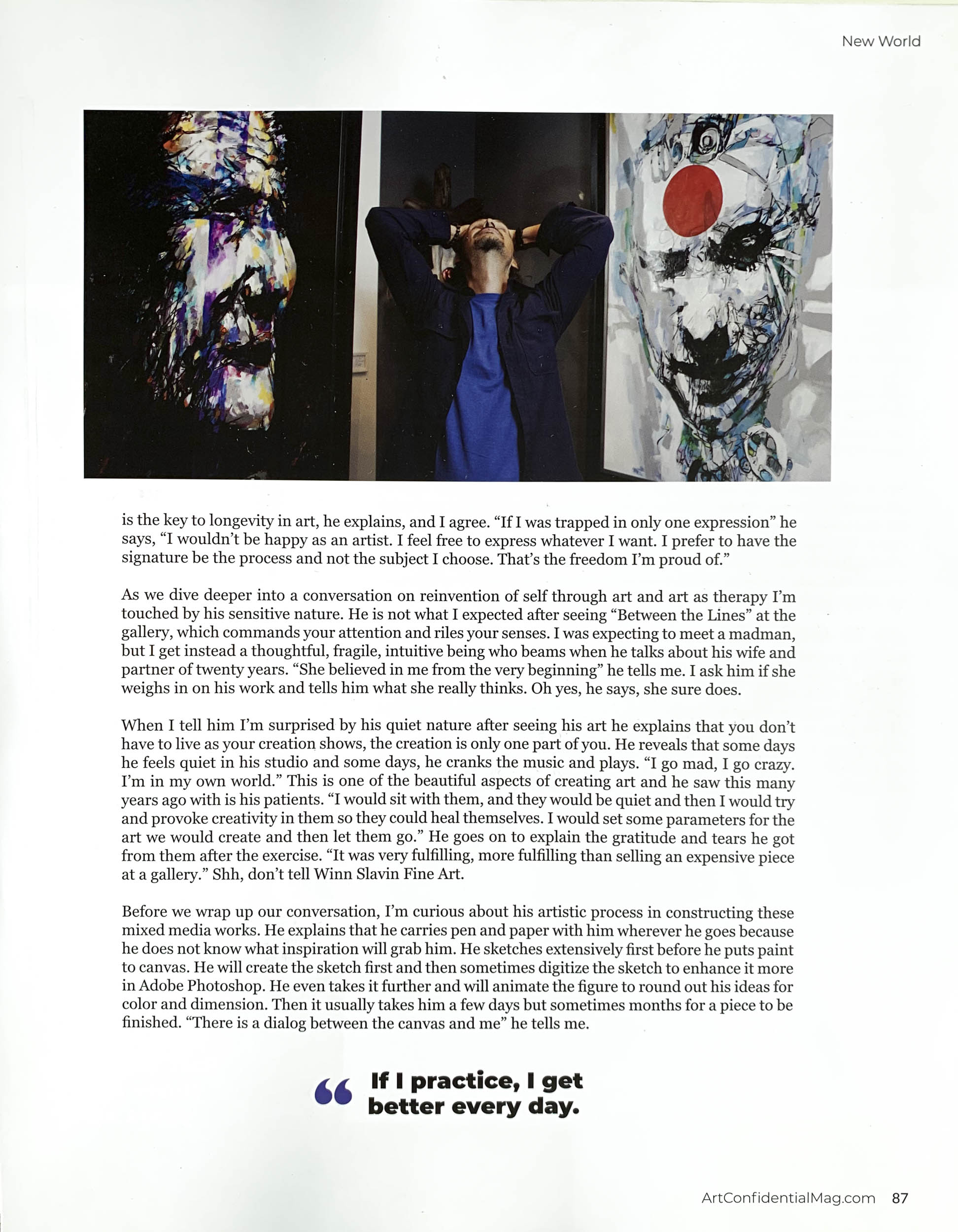 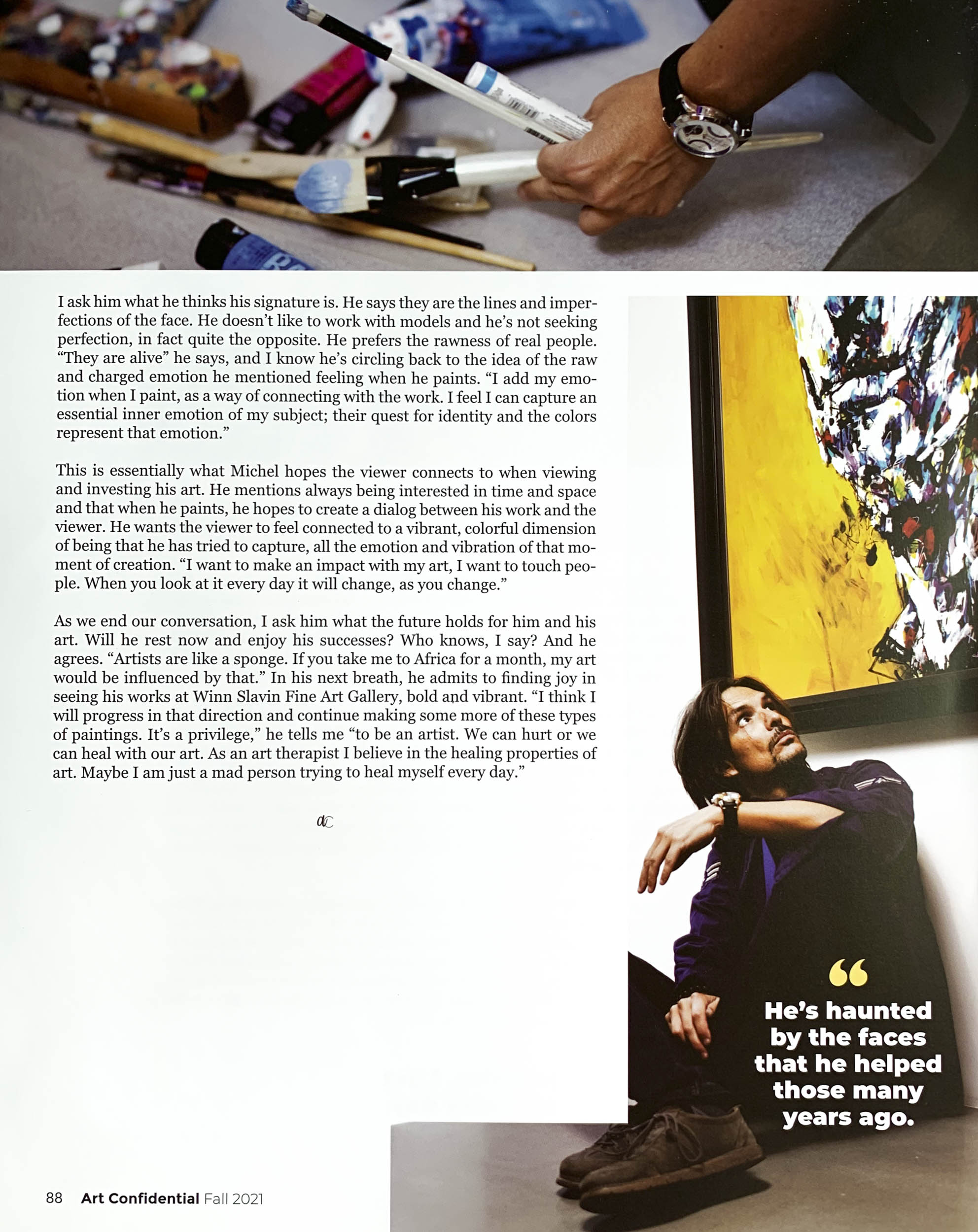 The Exhibition of Michel Desroches

"Maybe I'm a madman" he says to me, "and my art cures me." This is just the kind of remark you'd expect from a ten-year veteran of what he calls 'art therapy.' It is not what you expect though, as I dig deeper into this French Canadian's past, forging for bits and pieces of insights into what makes this madman tick. As it turns out, Michel has had a past life as a facilitator of art therapy for people with mental illness. This won't come as a surprise when you experience his work up close at the Winn Slavin Fine Art Gallery in Beverly Hills, where on opening night a robust forty-three large scale mixed media works of art were revealed, created over four years.

`Between the Lines' is the name of Michel's show at the Winn Slavin Fine Art and it simply must be seen in person. If you are familiar with such artists as Henri Matisse, Andre Derain and Marc Chagall you will see their influences here in the strong use of color and thick painterly quality favored over exact represen-tation that is so widely known in Fauvism. But don't be fooled, Michel's work is also keenly inspired by symbolism and struggles to tell a different story.

"When I was young" Michel tells me, "I was fascinated by people who were strange and things that were strange or a little off. That's why I worked in mental illness for ten years. I've always been curious what goes on inside someone's mind. Genius and insanity are very close, you know." After seeing his recent work, this explains a lot and I'm curious to know more. He goes on to tell me that this current style is a departure from the type of work he was producing prior. He favored a monochromatic palate and less drama but after moving to a beautiful country-side home in St. Jean sur Richelieu near the city of Montreal, his work has changed.

"The light is beautiful in my studio. It's open with windows out to nature. Nature can be so inspiring." Being able to stretch out a bit in his new creative space, Michel decided these new pieces needed to be larger than he had produced in the past. The combination of sheer size, flamboyant color and emotional rawness of his subjects is what makes these pieces so impactful. The gorgeous space at Winn Slavin Fine Art only improves their appeal, with each new face revealing itself around every new corner. Walk up the stairs and be surprised again at a six-foot by five-foot canvas of a woman's beautiful, soulful eyes starring through you, aptly named, "Follow Me."

Michel tells me that he sketches every day, no matter what. He's haunted by the faces that he helped those many years ago and new faces he meets every day. He's attracted to the lines and the imperfections on the face that reveal the secrets of someone's life, the messy details that we all experience. Playing with his sketches is his escape he tells me, of the brutal reality that surrounds us. Life can be hard, busy, and sometimes boring so why not create your own playground, your own world to play in, for your eyes to wonder around in? This is at the very core of why Michel continues to reinvent himself and try new ways of expression. "My art is a demonstration that I am strong in my heart," he says to me, and I understand why he does what he does. It comes from his heart. There is no rationalizing 'art.'

"It is my goal, to be as good as I can be in my expression of my art. I'm always practicing; my music, my writing, my sculpting, and my drawing. If I practice, I get better every day. If I get bored of my illustration, I make music. If I get bored of my drawing, I do my sculpting." If only we were all so lucky to be good at so many different types of art and expression, I tell him. Oh no he says, not everything I create is perfect. I like this and ask him to elaborate. Oh yes, he says, sometimes it's shit, and I start again. The trick is to keep starting again and trying things differently, I guess. This is the key to longevity in art, he explains, and I agree. "If I was trapped in only one expression" he says, "I wouldn't be happy as an artist. I feel free to express whatever I want. I prefer to have the signature be the process and not the subject I choose. That's the freedom I'm proud of."

As we dive deeper into a conversation on reinvention of self through art and art as therapy I'm touched by his sensitive nature. He is not what I expected after seeing "Between the Lines" at the gallery, which commands your attention and riles your senses. I was expecting to meet a madman, but I get instead a thoughtful, fragile, intuitive being who beams when he talks about his wife and partner of twenty years. "She believed in me from the very beginning" he tells me. I ask him if she weighs in on his work and tells him what she really thinks. Oh yes, he says, she sure does.

When I tell him I'm surprised by his quiet nature after seeing his art he explains that you don't have to live as your creation shows, the creation is only one part of you. He reveals that some days he feels quiet in his studio and some days, he cranks the music and plays. "I go mad, I go crazy. I'm in my own world." This is one of the beautiful aspects of creating art and he saw this many years ago with is his patients. "I would sit with them, and they would be quiet and then I would try and provoke creativity in them so they could heal themselves. I would set some parameters for the art we would create and then let them go." He goes on to explain the gratitude and tears he got from them after the exercise. "It was very fulfilling, more fulfilling than selling an expensive piece at a gallery." Shh, don't tell Winn Slavin Fine Art.

Before we wrap up our conversation, I'm curious about his artistic process in constructing these mixed media works. He explains that he carries pen and paper with him wherever he goes because he does not know what inspiration will grab him. He sketches extensively first before he puts paint to canvas. He will create the sketch first and then sometimes digitize the sketch to enhance it more in Adobe Photoshop. He even takes it further and will animate the figure to round out his ideas for color and dimension. Then it usually takes him a few days but sometimes months for a piece to be finished. "There is a dialog between the canvas and me" he tells me.

I ask him what he thinks his signature is. He says they are the lines and imperfections of the face. He doesn't like to work with models and he's not seeking perfection, in fact quite the opposite. He prefers the rawness of real people. "They are alive" he says, and I know he's circling back to the idea of the raw and charged emotion he mentioned feeling when he paints. "I add my emotion when I paint, as a way of connecting with the work. I feel I can capture an essential inner emotion of my subject; their quest for identity and the colors represent that emotion."

This is essentially what Michel hopes the viewer connects to when viewing and investing his art. He mentions always being interested in time and space and that when he paints, he hopes to create a dialog between his work and the viewer. He wants the viewer to feel connected to a vibrant, colorful dimension, of being that he has tried to capture, all the emotion and vibration of that moment of creation. "I want to make an impact with my art, I want to touch people. When you look at it every day it will change, as you change."

As we end our conversation, I ask him what the future holds for him and his art. Will he rest now and enjoy his successes? Who knows, I say? And he agrees. "Artists are like a sponge. If you take me to Africa for a month, my art would be influenced by that." In his next breath, he admits to finding joy in seeing his works at Winn Slavin Fine Art Gallery, bold and vibrant. "I think I will progress in that direction and continue making some more of these types of paintings. It's a privilege," he tells me "to be an artist. We can hurt or we can heal with our art. As an art therapist I believe in the healing properties of art. Maybe I am just a mad person trying to heal myself every day."